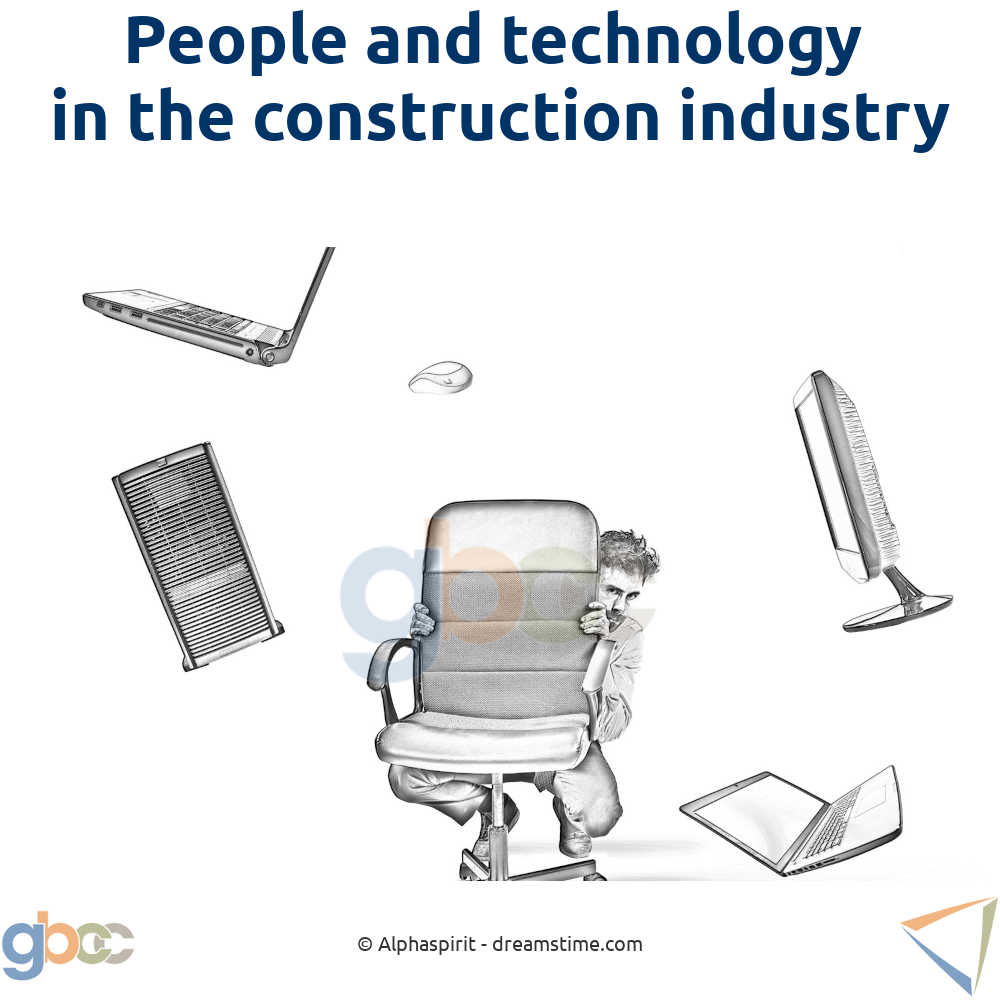 PrevPrevious post: Digital transformation: the difference between “data” and “information”
Next post: Career of women, staff development and gender quotaNext

People and technology in the construction industry

In this article, I talk about parallel realities, the relationship between people and technology in the construction industry, conservative and modern hierarchies, and changing attitudes.

For most of us, the internet is truly indispensable. In a professional context, too, work is increasingly being done on internet-based platforms to make information accessible to everyone and to work collaboratively. This requires a completely different way of working than before – even though some of us might not like it and consider it a problem.

That’s why I had to smile when I read about a famous artist who solved the problem in a completely different way because, according to the article, she is at war with modern means of communication. The tenor of the article is since she is such a diva, her entourage has to take care of everything from operating her smartphone to sending emails on her behalf.

While reading this article, I thought to myself that if the lack of affinity for technology is supposed to be an indicator of a person’s diva-ness, then the biggest divas are probably gathered in the small and medium-sized companies in the construction industry – at least in German-speaking countries.

Critical self-reflection comes up short in the construction industry

I have to think of scenarios I’ve come across, like this: a senior construction project manager in a client company with a hundred employees did not have a PC but wrote a few lines of instructions on a piece of paper for the purpose of internal project communication.

Yes, you have read that correctly – a senior construction project manager! No PC! In the 2010s!

I have been in business for over 30 years and a lack of affinity for technology is something I encounter in a wide variety of industries, and not only in construction. Typically, this is accompanied by a sense of guilt that goes something along the lines of “We know we need to catch up, but unfortunately we don’t have the money at the moment.”

Initially, money seems to be the problem, but it’s actually not the primary reason for companies in the construction business avoiding technology. Rather, it seems that a lack of affinity for technology is, in some respects, part of their self-image of being “craftsmen”. Instead of learning and using new technologies, they hone more traditional skillsets that do not require it, and therefore they can be proud in their self-image as a “craftsman”.

Innovation and technology in the construction industry: a parallel reality

Parallel to this reality exists another reality. A reality in which remarkably innovative and forward-looking technologies are currently available and would instantly eliminate many of the industry’s inherent problems.

Why can’t these two realities come together? How can it be that all buildings could be safely and thoroughly planned with “BIM”, but instead we struggle daily with various construction site debacles? Why don’t the innovative technologies catch on?

My hypothesis is that the reason lies in an insufficient premise of the software and technology providers.

The premise that people can be programmed like a computer to “function properly”; that it is possible to change people’s behaviour without first dealing with their inner attitude.

Instead, they follow this guiding principle: if we don’t get anywhere, we’ll just describe the technical advantages of our solution in more detail and offer even more implementation workshops.

These providers only need to take a look at their own company to realise that this premise cannot be true. After all, if they can’t get their own employees to function properly, how can the client company be any different?

How does a company become an organisation in which professionals work, take responsibility for their own tasks and projects, think cooperatively, move with the times, and advance their own company organisationally and technically of their own accord?

A change of attitude: hierarchical cooperation

The larger a company, the more important the influence of organisational hierarchies on cooperation becomes. Hierarchical interaction, therefore, has a significant influence on the mindset of the employees. And the understanding of leadership is strongly influenced by the zeitgeist – and possibly also by the self-image of an industry.

In the traditional understanding of leadership, which is still widespread in the construction industry, the superior person is seen as someone who leads and communicates clearly where things are going. In fact, I hardly know of any other industry like the construction industry where employees in general, and construction workers in particular, are treated so consistently like “immature children” who always need the attention, supervision and guidance of a “mature adult”. Visualised with this dialogue:

Commonality of the conservative and modern leadership approaches

The modern leadership approach, on the other hand, sees the superior as someone who motivates the employees; responds to their needs; recognises and promotes their talents; addresses them emotionally; involves them and inspires them for the company.

This sounds harmonious and wonderful, but it has its pitfalls.

Because what modern leaders easily overlook is that it does not matter whether a person with a traditional understanding of leadership is “fatherly-strict” towards the employees or a modern leader is “motherly-caring”.

In both cases, the employees tend to be treated “from above” as immature children instead of mature professionals.

Let’s take a modern manager who says this during the annual review:

In this case, they’ve massively underestimated the consequences that will arise because the attention of this employee, the individual, is diverted away from the overall goal of the team. To make it easier for you to grasp the inner attitude behind this sentence, here is a comparison of what I would have said instead based on my own understanding of leadership:

Whether traditional or modern, often it is the leaders themselves who are, to some extent, responsible for their staff reacting to every technical innovation like sulky, defiant teenagers who have been told by their parents to finally clean up their room.

Change of attitude: teamwork in an operational organisation

In other words, the individual’s attention is not focused on what is really relevant! Because, in reality, a company consists of interlinking processes and steps across reporting periods and reporting lines.

What one individual produces as output is needed elsewhere as input by another person so that they can continue to work.

The quality of cooperation during these interactions determines whether human resources are used productively and profitably for the benefit of the company.

This is precisely where digitalisation and automation campaigns come in, but they will not be able to have an effect as long as the individual’s attention is not focused on the processes. Check this yourself at the next opportunity. For example, ask a person entering a sales order in the system: “Why did you fill in field X? Who gets this information? Why did you leave field Y blank? Who would benefit if the information were available?”

They most likely won’t give a useful answer because this information was never provided to this person. And this person won’t consider to actively gather this information, because this role expectation was never discussed and mutually agreed upon with them. And this is exactly why expensively purchased ERP systems gradually degenerate into dusty digital filing cabinets.

Change of attitude: the individual

You will significantly increase the likelihood of a change in attitude among colleagues, employees, superiors, and business partners by first starting with yourself and critically examining your own behaviour. Under what circumstances do you look down on others in a patronising, reprimanding, or overbearing and caring manner? Under what circumstances do you react sulkily and/or defiantly to a colleagues’ request because you assume it is filled with bad intent?

The better you succeed in accepting reality as you find it, objectively analysing it, soberly recognising your options for action, and perceiving them, the more likely it is that your counterpart will subsequently interact with you as an “adult” professional.

Initiating a cultural change is not a task for top management but one for the whole organisation. All departments and hierarchies should be actively involved at the same time – at least through their deputies.

What they need first and foremost is contextual information: how do we, as humans, function and how do we “systemically” manage our interactions? How does miscommunication arise and what can we do about it? What are the possible advantages and disadvantages of organising managerial activities operationally instead of hierarchically? And much more.

Above all, collectively addressing the issue of complexity is imperative because companies function “complex-causally”. By this, I mean that several causes have several effects, counter-effects, and feedback-loops. Thus, there is no such a thing as a “true” or “correct” solution, but only the hypothesis of a possible approach where the advantages probably outweigh the disadvantages. Consequently, what is usually called “solution implementation” is merely the testing of the hypothesis that has been put forward.

Developing a decision paper should also not be a task for management alone. Rather, the employees should be given the task of developing proposals for solutions using the bottom-up approach, because this process has three immediate effects:

Because what distinguishes humans from machines is that we want to be needed. We want to be given the chance to contribute and to realise that we create meaning with our work – for the benefit of the company and its customers. The positive side effect is that even your employees, who are not involved in customer business, become fans of your company and its products – fans of themselves, so to speak.

To use the example from above again, should you one day observe a scene similar to this in your company, then you will know that your company is making good progress in terms of cultural change:

My four-part series of articles starting with “Your effectiveness is being torpedoed by your organisational structure!” also deals, to some extent, with the construction industry.

PrevPrevious post: Digital transformation: the difference between “data” and “information”
Next post: Career of women, staff development and gender quotaNext

For more than 20 years, I advised companies on financial issues as a banker / investment banker. Later, through my work as the managing director with overall responsibility for a wholesale and logistics company, I became more aware of certain issues that are inherent to owner-managed, family-owned companies. To pass on this experience, I launched gbcc in 2011. With my E.A.G.L.E.-Approach I support you in solving complex problem situations. Across departmental boundaries and responsibilities. Concerning both factual issues and interpersonal interactions. It is necessary to answer: How did the problem arise? What factors are keeping it going? What options for action are available to you?